The mosquitoes had turned my legs into an all you can eat buffet. Looking at the little red dots that marked the end of their existence on this plane I wondered if I was creating a super race. Maybe, just maybe, I was only killing the slow and stupid ones so that the fast and smart would reproduce. While I was still contemplating my role in natural selection I noticed a honeybee covered in Zucchini pollen. She landed in a flower that was very low to the ground and the angle would make for a really difficult shot. I’ve photographed honeybees covered in pollen before but it was was several years ago. My lighting and skills have improved a lot since those early images, but shooting her in that flower was going be tough. The petals act like a yellow bounce card making the light very warm, and then there’s the background to worry about. If I shot her at the edge of one of those petals to get a break on the light then there’s a good chance that the background would be black. Given the choice between a shot with a dark background, or no image at all, I can go quite a while before posting a photo to my gallery. The average macro photographer will accept a black background due to flash falloff but John Q. Public (someone who knows nothing about macro and the difficulty of shooting the small world) will not and he’s my target audience. There had to be a way…

Watching her feed I realized that she was looking for nectar, and just happened to be covered in pollen. Honeybees generate static electricity with their wings, and that static charge builds up in their hair and attracts pollen. Since she was looking for the sweet stuff she just might take some bait because honeybees are also very task oriented –if they are looking for pollen then they won’t take the sweet stuff. But she was definitely going for the nectar at the very bottom of the Zucchini flower. So when she came up to the top of the flower to do some pre-flight maintenance (there was so much pollen stuck to the hairs in her eyes she probably couldn’t see) I put some honey on the end of my finger and put it in front of her. She not only climbed onto my finger to feed on it, she let me stand up so I could position her in front of a grape leaf to keep the background from going black. Sometimes the flash would bother her and she’d fly off, and sometimes she’d just finish the honey and would move on. But each time she’d land less than a meter from me to try to get more of the pollen off, and each time I’d offer her a baited finger and go back to shooting.

There was so much pollen on her that, even from a distance, I could see it falling like snow.

I took a range of compositions and magnifications. I knew that it might be quite some time before I had an opportunity to shoot a cooperative pollen covered honeybee under almost controlled conditions so I wanted to make the most of it. One of the things that has me spoiled about shooting with the Canon MP-E 65mm is that I know what magnification I have to be at to get the framing that I want. Being able to simply dial in the mag without having to add or subtract extension tubes from a normal macro lens means that my EF-S 60mm doesn’t get as much time on the camera even though I can take it to almost 3x with a full set of tubes. I only edited three of the frames, saving the rest for this winter when there’s nothing moving and I want to post an image to my gallery. Below are the two that I like the most. As always they're single, un-cropped, frames taken hand held. I am the "finger model". 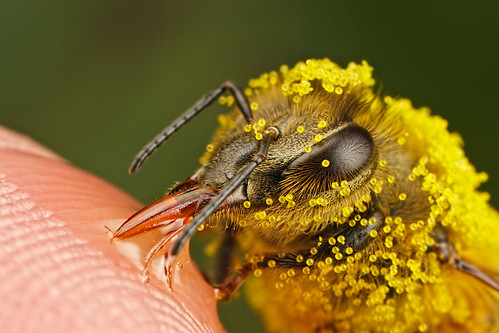 Someone asked me “How did you even think to do this?!” My mentor, Professor Mark Plonsky, got me to think outside the box and to accept no limits when shooting the small world. I remember showing Mark a photo of a dragonfly that I was really proud of. He said something like “That’s nice, but you could have gotten closer”. At first I was kinda upset, but the more I looked at the image the more I realized that he was right. I could have gotten closer but I didn’t because I thought the critter wouldn’t let me. I failed not because the subject didn’t cooperate –I simply assumed that it wouldn’t…

Footnotes: Looking at those old honeybee shots I know that I could go back and re-edit some of them because my post processing has also improved. Added to my “to do” list…

Some of you are gonna want to over react to my using honey to bait honeybees. First it was probably their honey, since there is a hive less than 100 meters from where I was shooting and I bought the honey from the beekeeper that “owns” the hives (owns is in quotes cause we all know that women rule the world and the girls are just letting him think that their home is his). Also most beekeepers have told me, due to the small quantities that I use, that even if there’s something bad in the honey a healthy hive will not be affected. So relax.

Last, but not least, be VERY careful when shooting anything that can sting you. You could be allergic, and even if you’ve been stung in the past you could still have an allergic reaction to the venom. Do not shoot alone…
Posted by Dalantech at 2:20 AM No comments:

It's All About the Background 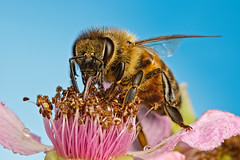 For quite a while now I've gone out of my way not to get a black background in my photos -everything from holding the subject in front of grape leaves to fence posts. But one of the things that I've wanted to do for a long time is simulate a blue sky. So I bought a piece of light blue plexiglass and experimented with putting different materials behind it to reflect the light from the flash back to the camera, but nothing seemed to work. One day while driving home I was looking at a blue sky that was being diffused by some very thin clouds and it dawned on me that what I really needed was something that was going to diffuse the light before it passed back through the plexi. Something like a white card, but what did I have at home that acted like a white card? Then a little voice in the back of my head said:

"What about all that photo paper that you don't use, you idiot. You know, the stuff you have laying around from ink jet printer kits that you had to buy when the store ran out of individual ink cartridges."

The voice was right -suddenly I was getting that light shade of blue that I wanted to see in my backgrounds and all I had to do was gaffer tape a piece of photo paper to the back of the plexiglass, glossy side to the camera. If you try this trick yourself be advised that if you get the subject too close to the plexi that there will be a visible halo around the critter that's gonna be impossible to remove in post. I try to keep the subject at the same distance from the background that it is from the lens (maybe a little more).

Here's a short video of me using the plexiglass in the field to shoot the image included with this post. Pretty basic stuff really, but the results are pretty nice.

Posted by Dalantech at 9:14 AM No comments: