It's All About the Light...

A lot of you are shooting in natural light that is specular (not diffused) and it is killing your image quality. Bright sunlight is great for getting high shutter speeds and higher Fstops at lower ISOs, but it is terrible in terms of color and contrast. Better to shoot in the golden hour right after sunrise, or before sunset. You can also wait for light cloud cover to act as a diffuser for the big yellow ball or use a scrim (or similar) diffusion material.

For those of you using a flash I would say many of you are shooting with light that's "soft specular" -soft because the light source is large relative to the subject, so the shadows are soft. But specular because there is a hot spot in your diffuser, and it is erasing a lot of the detail in your images. The light from that hot spot hits specular surfaces in the scene and those surfaces will return the color of the light source, and not the underlying color of the specular surface. Even if you under expose the shot the light from the specular surfaces in the scene will be the color of your flash/diffuser. I have seen people post triple digit focus stacks that had less detail than my single frame images due to poor light quality.

I am like a hamster on a wheel going round and round with my photography. If I am not working on technique, then it is composition or lighting or post processing -you get the point. Now I think that post processing is still my weakest area, but I am at that point in the hamster wheel. I have come to realize that my light quality is good enough, so I can take a break on that one for a little while. That light is allowing me to change my post processing and really improve the overall quality of my photos, and the light is doing most of the heavy lifting. I have started to shoot at F14 to get a little more depth (the MP-E 65mm has a hard time producing a sharp image circle at F16 that cannot be explained just by diffraction) and with the improvements that Topaz Labs has made to Sharpen AI this is what I am able to do at almost 3x: 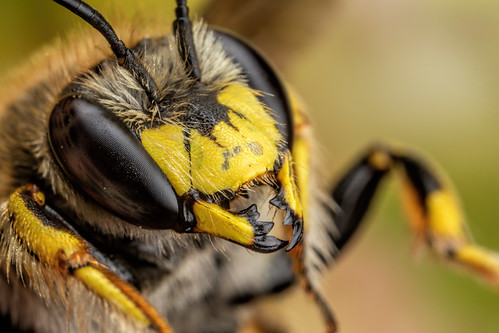 Granted if that were a focus stacked shot the trailing eye would be in focus, but due to the way our brains are wired it does not need to be. Plus, that critter was active and was not sitting still. It was already feeling warm here when I took that shot at 6am this morning. Maybe someday the tech will get good enough and I can take limited stacks of critters in motion. But that day is not here yet, and the stacked images of critters in motion that you see from time to time around the web are staged. Due to the number of people faking images of active subjects I get people asking me if the subjects that I shoot are dead. They are all alive and kicking though, some more lethargic than others due to early morning temps. Some are just hungrier than afraid: 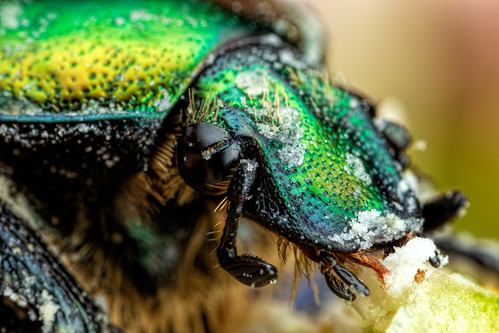 If you have any questions about diffusing light for field macro, then post your questions here and I will answer them. I have post moderation enabled due to all the spam posts but, if your post is not spam, I will approve it even if it is something negative about me or my photography. Just do not include a link with it unless you want me to look at your gallery.

Footnotes: Some of you have gotten bent because I include "This is a single, uncropped, frame taken handheld." with every image I post. I am not bragging or trying to rub your nose in the fact that I do not focus stack. I simply get tired of answering the same questions over and over.

I recently had to change the way that I list the magnification that I am shooting at because people see the depth in my photos and think that I am using a lower magnification and including the crop factor of the sensor (1.6x). But cropping does not change the magnification that an image was taken at, it simply creates an enlargement of the subject in the frame. So instead of listing the mag as “2x” or “over 3x” etc. I am now listing it as “set to 2x” or “set to over 3x” to avoid yet another question. The apparent depth in my images is due to the way that I am controlling where the area of acceptable focus falls in the frame, and not due to the lens I am using. At the same Fstops and magnifications Canon’s MP-E 65mm has the same depth of field as any other macro lens.

The MP-E 65mm is not less diffraction prone, but it does have a floating lens group that corrects the focus as the magnification changes. Lens sharpness, or lack of sharpness, can amplify diffraction softening. PSA: Even though an extension tube is an air gap it can still decrease image sharpness because all lenses are designed to produce a sharp image circle at a fixed distance from the image plane (film or sensor). So, adding tubes can make a lens “softer”.
Posted by Dalantech at 1:29 AM No comments: