Working on a New Diffuser 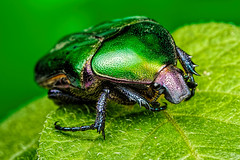 The diffuser that I mentioned in this post is still the best commercially available diffuser for the MT-24EX, but last November I started working on a new set. I built the prototype out of some diffusion material that I had laying around the house and took the shot that's included with this post. At life size that beetle was a pretty good torture test -the diffusers are at their maximum distance from the subject and the shell is very reflective, but there is still color and texture in the specular highlight area.

I built a second model that had just a few minor improvements over the prototype, and after I finished it realized that what I need is something modular that I can take apart, change out diffusion materials, and reassemble. So I went through my son's Legos, determined what plates I'd need to build a diffuser, and ordered the pieces from the Lego online store. I'm still waiting for the order to arrive, but when it does I expect to have a diffuser set that not only works better than what I have now but I'll also be able to rapidly make changes to it. As it stands now every time I want to experiment with some new plastic I have to build a new diffuser, and it's just too time consuming and expensive.
Posted by Dalantech at 3:55 AM No comments: