Photographing Honeybees on their Comb 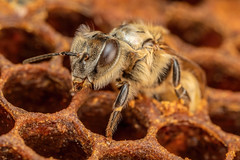 Last spring we spent a long weekend at an Agriturismo and across the fence from us was a row of honeybee hives. As luck would have it one morning the beekeeper came out to inspect the hives and I struck up a conversation with him. After showing him some of my photos he was interested in me photographing his honeybees, but later on in the year when it was warmer. That opportunity came last weekend and he cracked open no fewer than five hives to inspect the girls and to let me try my luck at shooting them. I say luck because his bees were very nervous and most of the time they were in constant motion. Although I didn't get any really good shots of his queens I did manage a few "honeybee birthdays" like the one to the right. Even when thet did stop to work some of them kept an eye on me :) 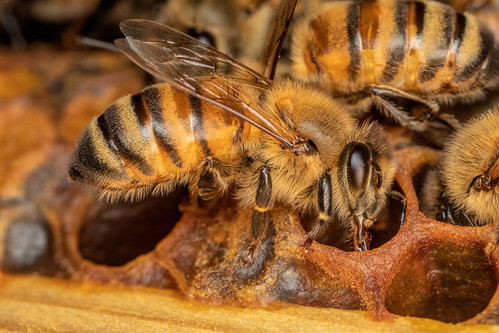 I was also getting pelted by the bees, like little bullets they were slamming into my bee suit. At one point while I had the camera, and the veil, pressed against my face one of the girls stung me on the nose. Fortunately I didn't have much of a reaction to it, it just stung a little. Worth it though, because although it wasn't easy to photograph them I still had fun and it was a good learning experience. I plan to go back to the same hives next June to photograph the drones (males). 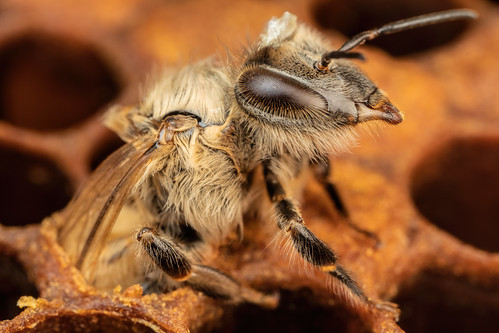 If you're going to photograph honeybees on their comb then definitely wear a beekeeping suit. I had on a top, gloves, head covering with a veil, and bluejeans. It's best to at least buy your own gloves, since any gloves that the beekeeper owns will have propolis on them and it will get on your camera. Even better if you have your own gloves and top. Don't stand directly in front of the hive (stand behind it) and pay close attention to any instructions that the beekeeper gives you since they know their bees. If the bees start to swarm you, like they did me, ask the beekeeper to hit you with some smoke. It's easier to photograph the girls if the comb can be laid down flat without crushing the bees on the reverse side. The beekeeper I was working with had a stand that he used to hold the comb after taking it out of the hive and the top of the stand worked pretty well. Take a lot of photos, and don't worry about your "keeper rate" -you pretty much have to be one with the universe and the delete key on your keyboard when shooting active subjects, especially ones that are not too happy about you being right next to their home.

Until next time folks, happy shooting!

Footnote: Jennifer, my youngest daughter, wanted to get some shots of the beekeeper and I while I was shooting the bees. But I was concerned about her getting stung since I didn't have a beekeeping suit for her, so this is the view from where we were staying: 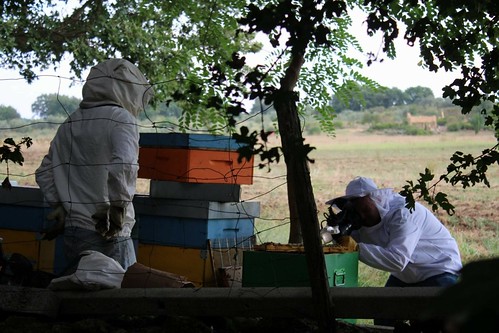