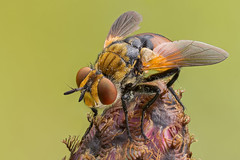 The image included in this post isn't mine, it was taken by Andrea Hallgass and I'm blogging about it because I think that it's a great example of an excellent photograph. The light, color, and composition are all spot on. Normally I wouldn't be interested in a top down composition but the way that the subject flows into the frame, the dead space in front of it, and the fact that everything from the wing to the head is in focus really works for me. So it's one of those images that kinda breaks the rules but in a good way. The lighting is also really good and it's very well diffused, and it's that well diffused light that's helping to bring out the textures in the subject.

...and I have to admit that the detail in this shot is a part of what makes it stand out...

I'm not so sure that the image had to be taken at F4.5 to get that level of detail, pretty sure that F8 would have worked just fine at 1.8x and Andrea wouldn't have to take 85 frames at that Fstop, but the detail when added to a well lit and well composed scene makes for a spectacular image! Well done Andrea -you've definitely set the bar high with your macro photography!

One of the benefits of linking my blog to my Google Plus account is that when I blog I can also announce the post on my Google Plus page. In response to this post David Elefante brought this video by John Hallmen to my attention that might help some of you deal with those pesky antenna that just don't seem to sit still.


For those of you who do not know John Hallmen it's my honor and privilege to introduce you to his work!
Posted by Dalantech at 3:07 AM No comments:


Sadly a lot of you are going to view this video and use it as an excuse to focus stack. But as a macro photographer who routinely shoots single frames with a macro lens stopped down to F16 this video reconfirms what I've been saying for years -diffraction is not the devil that the macro community has made it out to be...

There are so many factors that can impact image sharpness that blaming all of the softness in your photos on diffraction, IMHO, shows a great deal of inexperience.
Posted by Dalantech at 3:26 AM No comments: