I'm going to kick off this article with some "ground rules". I'm more interested in talking about light in terms of diffusion and flash eficiency, since both are going to have an impact on the amount of detail that can be captured in the subject. Even the angle of the light can make a difference in how much detail you'll see.

The funny thing about macro is that it seems to attract a lot of really intelligent people. Unfortunately most of them can't wrap their heads around anything that cannot be measured in a lab and successful tested. An example is that I like diffused light that looks "feathered". Do I know what that light looks like when I see it? Yup. Can I accurately describe it to you? It would be tough, especially since I don't feather my light by rotating the flash away from the subject. We're also not going to get into a discussion about the best way to diffuse a light source because it's too style dependent. I'd love to be able to use studio lights and huge soft boxes. Unfortunately it's a little tough to hand hold that kind of gear and chase after hyperactive subjects... 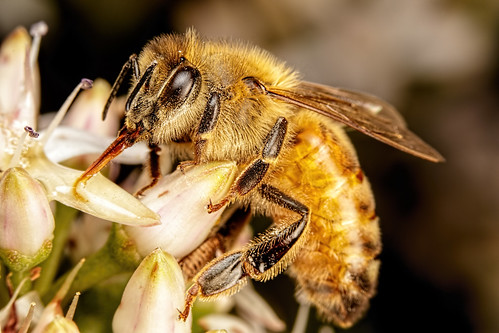 Note: The 1/focal length rule for determining the slowest shutter speed for hand holding a lens breaks down at 1x and higher magnification. You actually need much faster shutter speeds for shooting macro because motion as little as half the width of a pixel is enough to amplify diffraction. When shooting with the flash as your primary light source for the subject the duration of the flash becomes your "shutter speed". Although not as obvious as stopping a balloon in mid pop, or a bullet as it passes through an apple, flash based macro is a form of flash based stop motion photography. The more control you have over movement (yours and the subject) and the shorter the flash duration the sharper your images are going to be. A lot of the image softness that is blamed on diffraction is really just motion amplified diffraction, or what I like to call "macro motion blur". It won't look like traditional motion blur, but it will rob you of sharpness like diffraction does. The technique that I use to control motion and the way I diffuse my flash and get it close the subject are the reasons why I can capture a lot of detail even though I'm shooting with a lens stopped down to F11 or more.

Let's start off by looking at a common mistake that I see people making, especially people who are struggling with the bright spot in the specular highlights that a flash tube can make. I was speaking with a shooter several years back who had solved the hot spot problem by cutting a hole in a white opaque plastic cutting board and mounting it to the front of his lens. On the surface that might seem pretty good. No small central hot spot and light that looked pretty soft. But the guy who was using it to diffuse his flash for macro complained about slow flash recycle times and that his images seemed under exposed above 1x. The problem was that the cutting board was doing a better job of blocking the light than diffusing it, and his flash was firing close to or at full power most of the time. I think that a cutting board is a good example of a material that will diffuse a flash, but just because it can diffuse the light that doesn't mean that you should use it.

Lens mounted diffusers can be pretty effective, provide the flash is actually pointed toward the subject, is close to the diffuser, and not just camera mounted and firing straight ahead. Here's an excellent example of one made by John Hallmen, although it could use some improvements: 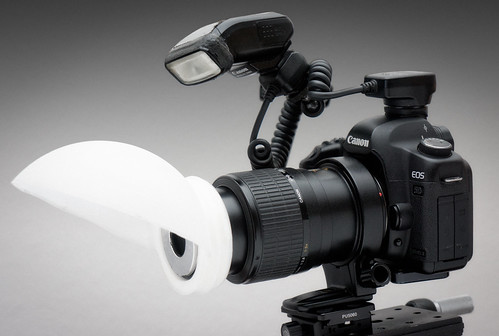 The general idea is to use the diffuser to shade the subject, so that the flash is the primary light source. You can then "walk the shutter" (decrease the shutter speed) to expose for the natural light in the background. One way to improve his design it to place something over the flash that will force any reflected light off of the back of the diffuser to go out the front. It would also prevent ambient light from coming though the diffuser (easier to make the flash the only light source on the subject). If you click on the image you'll get John's Flickr post with his list of pros and cons on using that diffuser. I have a lot of respect for Mr. Hallmen because he's one of the few people in the macro community that's willingly sharing his technique and experience.

Here's an example of what I mean by using the flash as the primary light source on the subject: 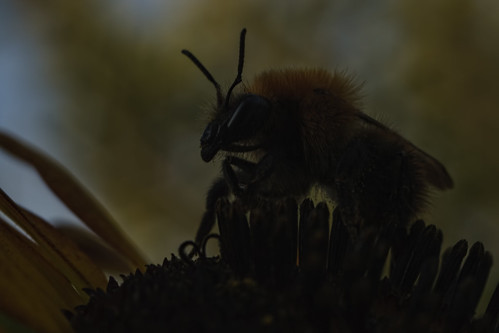 While shooting that bee the flash didn't fire and you can see that the critter is almost a silhouette. I have the camera set to expose for the background (although a little under exposed). So I can use the flash to expose the subject and it's shorter than the shutter speed duration help to freeze motion. 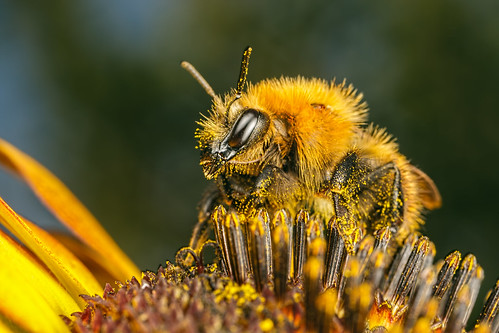 A camera mounted flash, with a lens mounted diffuser, will work (example here) and the light will be feathered because the flash isn't pointed directly at the subject. But since the flash is firing straight ahead it's not very efficient and you might run into problems keeping your flash duration short enough to freeze motion.

Food grade plastics are another example of a potentially poor choice for flash diffusion. A food container might be blocking certain wavelengths of light to protect the product, and could cause problems with your light quality that can't be easily fixed in post. I was using some plastic from a liquide yogurt bottle a few years back that made my light way too warm.

Ring flashes -just say no. They are very convenient and easy to use. But the light will look flat because the flash heads are too parallel to the lens, and because a ring flash almost wraps completely around the lens. So even when using ratio control to make one flash head brighter than the other the resulting light can still look pretty flat. Here's an example of the light "quality" that I was getting with a Canon MR-14EX over 10 years ago. 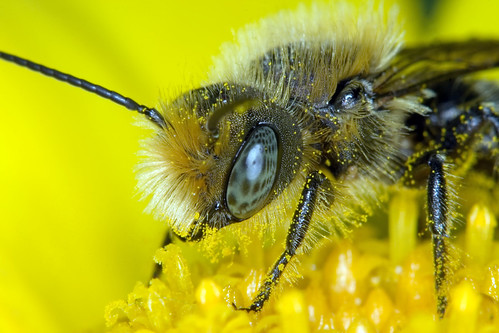 For some of you the light in that image is gonna be acceptable, but for me it's not. Even with a 4:1 ratio difference between the two flash heads the light still looks flat, and the specular highlight is pretty ugly. I have seen some attempts at adding a diffuser to a ring flash, as well as trying to mount one by not connecting it to the end of a lens. But unless you're a dentist, who needs to photograph a patient's teeth, you're better off with any other light source.

This may be part one of this discussion depending on the questions and feedback that I get. Stay tuned ;)
Posted by Dalantech at 2:47 AM 2 comments:

The more I post on forums the more I think I shouldn't. When I see people asking for comments and critique (C&C) I try to be fair, and honest, with my assessment of their work. But most of the time that's not what the person asking for C&C really wants -they just want to be "liked". They want me, and everyone else, to pat them on the back and tell them that they're doing great even when they're not. So I can either get on the "nice capture" train, macro's version of the like button, or say nothing at all. Heaven help me if I actually give someone honest advice! In the end all of the major discussion boards have pretty much degraded into circle jerks of mediocrity, with no one making any real improvement in their photography.

The more well known a photographer is, in any community, the more difficult it is to give them advice. They're addicted to the  gratification that they get every time they post an image, not realizing that being well known is like a feedback amplifier and for every positive comment they give they're likely to get several in return. That's why they shouldn't listen to any of the positive comments. The moment that they do they're probably going to stop pushing themselves to improve, and they'll stop listening to jerks like me who are telling them where they need to make changes.

Even when people ask for equipment advice it's not genuine most of the time. What they really want is reassurance, because they've already decided to spend the money.  But they'll go looking for someone, even an Internet stranger, to make them feel good about parting with the cash. I frequently make the mistake of looking at the person's gallery and telling them that they need to improve their composition, or lighting, or both and that new gear isn't going to help. But that's not the answer that they're looking for, and odds are the new kit is already on it's way or they had it before they even made a post asking for advice.

I though that the obsession with absolute image sharpness was killing macro, and to some degree it still is. But everyone's overwhelming need for approval might just put the final nail in the macro coffin...
Posted by Dalantech at 3:15 AM 4 comments: