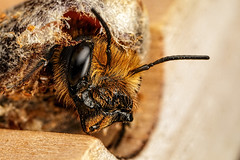 I'm getting a lot of good feedback on my recent Mason Bee photos. One of the things that's come to my attention is that a lot of you don't know that you can raise your own Mason Bees -it's really easy! Crown Bees sells complete kits including the bees. Now there's no guarantee that the girls are going to nest in your house, but even if they don't one of the species already in your area might, and if they both nest in your house even better! They're very gentle, they won't sting unless you step on them, and they are great pollinators! Even though I have a small garden we have to give fruits and vegetables away every year -the girls are really that good! Plus they're a lot of fun to watch :) The photo included with this post is one of the Mason bees hatching out from last year's nesting season, and the wooden tray she's on is from the bee house that I bought from Crown Bees.

Note that I'm not including affiliate links in this post -I'm not trying to make money from you. What I do want is for more people to get interested in these beautiful creatures, and to see their population in the wild get stronger. We need them folks...
Posted by Dalantech at 11:48 AM No comments: 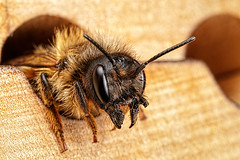 Last year I noticed some Mason Bees were building nests in one of the trees in my yard. Some of the branches had been cut, and the critters had tunneled into the soft cores (doesn't hurt the tree). So I hung up a solitary bee house that I bought from Crown Bees in it. I had the house sitting on my patio table and a female was already making egg chanbers, so placing it on the tree that I saw the other bees nesting in seemed like a logical choice. The image to the upper right is one of the girls starting her day.

Last weekend I noticed that some spiders had set up shop in my bee house. Normally I'd let nature take its course, but that was my house and my bees. Since it was warm (17C/62F) I thought some of the bees might hatch while I was cleaning the house so I got my camera ready. Here's a shot of one of the original bee's daughters hatching out of a cocoon: 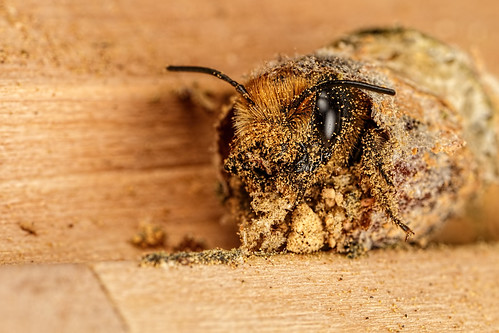 I may have more than one species of Mason Bee in my yard, because there are some clear differences in the males that I shot last year... 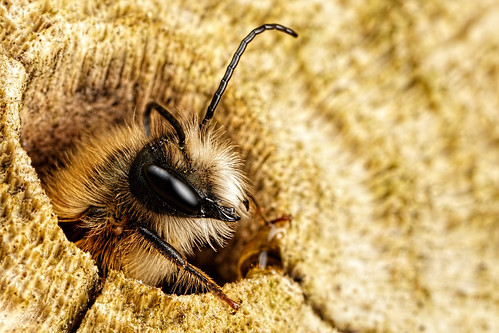 ...and the males that hatched out of my bee house last weekend... 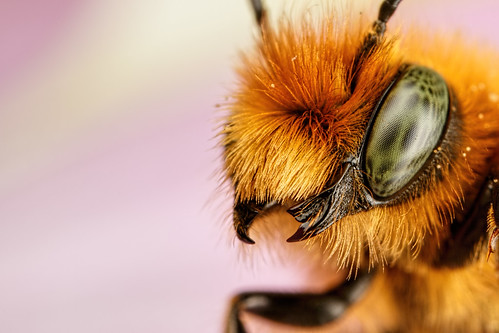 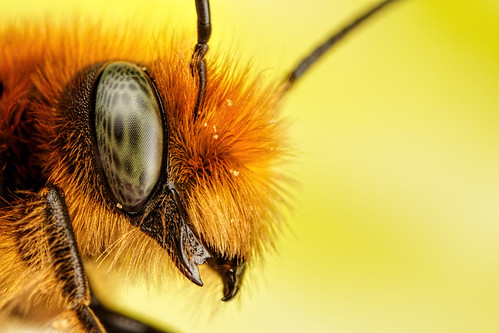 ...but they had to be the sons of one or more of the females that were building egg chambers in the bee house. Irregardless of who the parents are I can't be happier about seeing a larger population of native pollinators in my yard! We have a pretty small garden and yet we end up giving away a lot of vegetables due to all of the solitary bees. Best of all they are really docile and only the females have a stinger -and you'd have to really manhandle one of them to get stung. As for those sometimes scary looking mandibles I've never once been bitten. 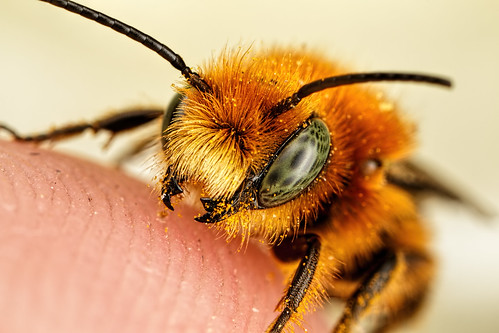 Why am I telling you this? Because natural pollinators are very important! I'm sure you've read in the news about colony collapse disorder (CCD). What you might not have heard about is the decline of natural pollinators. Most solitary bees are really good at pollinating crops because they are actually pretty bad at collecting pollen. Honeybees and bumblebees have pollen baskets on their hind legs and they pack pollen into it and use nectar to make it sticky: 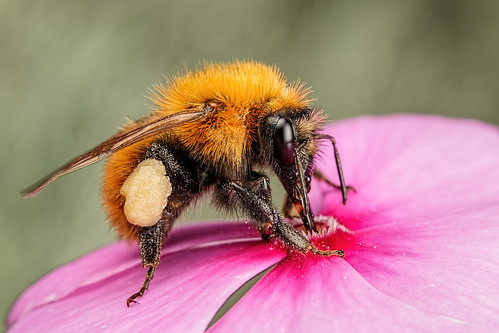 Once that pollen is glued down it's not coming off until the bee takes it off. Mason bees don't have a pollen basket and rely on the static electricity that builds up in their hairs to attract and hold pollen. So when they land on a flower to collect pollen they roll in the flower like a pig playing in the mud, and in the process spread some of the pollen that they had already collected from another flower. Also since not every flower is exactly the same some are pollinated better by different species of bee, so the more species you have foraging for nectar in your garden the better.

If you want to encourage natural pollinators in your yard or garden then check out Crown Bees -that's not an affiliate link. I'm sending you to Crown Bees not to make money off of you but because they sell quality products, have great resources on their web site (plus videos on You Tube), and excellent customer support. They can help you start your own colony of natural pollinators :)
Posted by Dalantech at 11:05 AM No comments:

Sleep Walking VI by dalantech on DeviantArt
Posted by Dalantech at 11:41 AM No comments: