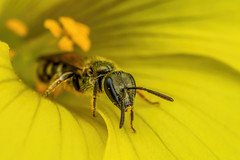 Due to some of the questions and feedback I've received lately I thought I'd explain what I'm doing with the camera and how I deal with different situations. One of the common comments that comes up is someone will see my photos, and all the depth that I can get at F11, and assume that Canon's MP-E 65mm macro lens can defy physics. But depth of field is strictly a function of magnification and the Fstop. So the depth that I get at 2x and F11 in a single frame with Canon's MP-E 65mm is the same depth of that I'd get with Canon's EF-S 60mm and 37mm of extension tubes (the EF-S 60mm is roughly a 37mm lens at minimum focus). So how do I get so much depth in my images? I pick an area where I want the focus to start and then I twist my wrist to lay the area of acceptable focus over the curve of the subject's face, creating a "magic angle" that makes the most out of the thin depth of field. The image to the upper right is an example, taken at roughly 2.5x and F11. The image below was taken at 3x and F11, and I shot the critter head on. 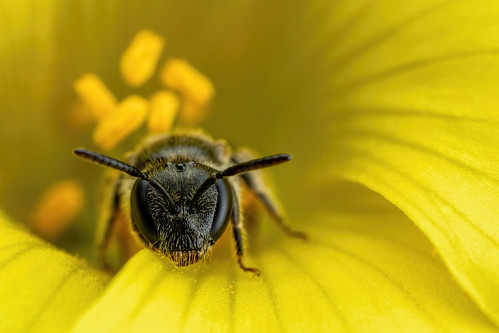 One of the many reasons why I don't focus stack is because most of the time the subjects that I photograph are active. Now some of you have been quick to point out that there are macro photographers that shoot active critters, and you're right -kinda. They are focus stacking active subjects when they pause long enough to take a "spray and pray" sequence of images. When I say that I'm shooting active subjects I mean that I'm tracking them with the camera as they are moving. Like this Sawfly that I shot at 4x and F11: 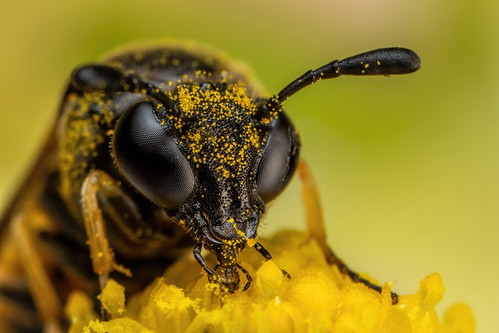 The Left Hand Brace Technique that I use allows me to eliminate a lot of motion (excluding subject motion) and get precise control over the framing and where I want the area of acceptable focus to be. But like any technique it has limitations. I've got the critter's perch in one hand and the camera in the other so there's no way for me to change the magnification of the lens. I have to look at a scene, make an educated guess as to what magnification will give me the framing that I want, set the MP-E 65mm to that magnification and then hope I can find a good composition. There are scenes, like this one, that I'd like another chance to shoot: 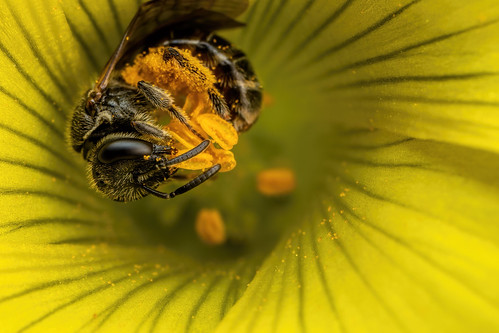 I love everything about that shot, except for the clipped wing at the top of the frame. She was moving so fast, forcing me to re-frame and re-focus every shot, that I'm lucky to walk away with anything. This is the photo that I took before that one, the one that caused me to increase the magnification (note not the same bee or flower): 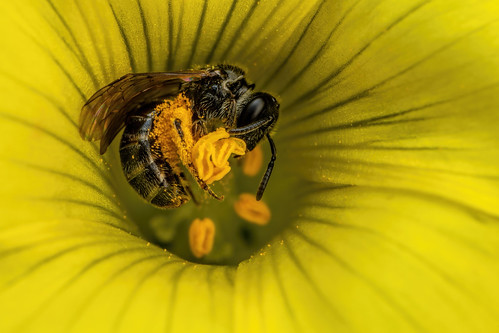 One of the benefits of using the Left Hand Brace Technique is that I can rotate the flower to position the subject so that it's looking into the lens. Some of the Sweat Bees included in this article felt me grab onto the Sourgrass flower they were in (it wasn't windy enough) and stopped foraging. When they come to the top of the flower it's very common for them to be facing away from me. But I can gently twist the flower's stem without spooking the subject, and it doesn't damage the flower. Shooting when it's windy is easier, since the critter can't tell the difference between the vibration induced by the breeze and the vibration that I create when I grab onto the flower's stem.

If you have any questions about how I'm shooting just drop me a comment, or join my Extreme Macro page on FaceBook and post them there. I have comment moderation enabled here at Blogger to cut down on spam. Rest assured that even if you leave a negative comment I'll post it provided it's not laced with profanity. Until next time happy shooting!
Posted by Dalantech at 3:55 AM No comments: