Controlled Splash 1-2
Originally uploaded by Dalantech.
Setting up some sort of delay timer for water drop photography has been something that I’ve wanted to do for a quite a while. There are a lot of pre-built controllers out there, but I wanted to roll my own after seeing the kits at the HiViz web site. So I ordered the last kit on this page and received it a few days ago for $25 USD counting first class priority shipping.

I have a remote cable on order for my Xti and I was going to use the controller to trigger the camera so I can use multiple flashes. But I couldn’t wait to try out the new “toy” so I picked up a couple of used disposable cameras from a local shop and rigged the trigger circuit to the switch in the camera that controls the flash. I also soldered over the switch that you would have to hold down to get the flash to charge. One word of caution: There is a large capacitor inside the camera that could still have a charge even after the battery has been removed. If you follow me on this project then be careful when you open the camera, and use an insulated screw driver to discharge the capacitor (just place the screw driver across the capacitors leads). You can get instructions on how to take apart a disposable camera from Make. They also have a kit in the Make store for 120 USD that looks pretty good, and if you what a controller with an LCD display there is the Mumford Time Machine.

I took the Styrofoam ends from the box that my 70-200 F4 L IS came in and hot glued some foam panels that I had from some other box. I made the tower small thinking that I’d need as much light as possible from the disposable camera’s flash. It turned out that I could shoot at ISO 100 and F22 and get images that were a little over exposed. The next “studio” will be bigger so I don’t get water on the material that I’m using for a background…

The next studio will also have an easy way to set up flowers and photos so that I can shoot water drops falling in front of them (the image gets refracted in the falling drop). For now here is a shot of “Beta Studio 1”: 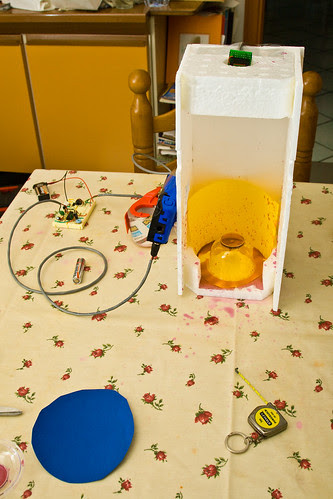 Posted by Dalantech at 4:56 AM

Nice shots! I ordered a trigger system from HiViz too and plan to fire my master with a miniphone to female hotshoe from Paramount. You're way ahead of me so I'll be interested to hear how Canon wireless works in the "high-speed" realm. My plan is to use some cheap sync cables as a backup.

I've used Canon flashes for this type of thing before, but in manual mode and at about 1/32 power. Any higher and the flash duration becomes too long to freeze motion.