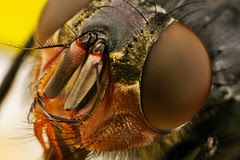 Fly at 4.5x
Originally uploaded by Dalantech.
From time to time you'll hear people talk about "magic angles" in macro photography. I'm not sure who originally coined the phrase, probably one of those things that's as old as photography itself. But I thought it would be a good idea to define it (since I get asked about it a lot) and to explain how I take high magnification shots with a lot of depth using a simple technique.

The area of acceptable focus is thin and flat, and unfortunately most of the critters I photograph are curved. The "trick" is to look for a way to lay a thin flat surface over a curve so that as much of it is covered as possible. The fly in the photo I've included with this post has a head that's almost triangle shaped and it should be pretty obvious that you can't shoot it head on. Placing a flat surface against the point of a triangle won't cover much, so there are some angles that just won't work for a single frame no matter how much depth you can get. Even though there are a lot of curves there are still some relatively flat areas that will allow you to make the most of what little depth you have at high magnification. It takes a little experience, but eventually you'll learn to recognize a good angle from a bad one.

The really cool aspect to magic angles is that I have yet to find one that does not work from a composition standpoint. If I can find a magic angle I'll end up with a well composed photo that has a lot of apparent depth. Since I'm more concerned about composition than getting maximum detail I haven't gotten into focus stacking -just haven't needed to do it yet.

Now for the technique part: For this shot I moved the lens in until the left front edge of the fly was in focus. Then, with the lower left hand corner of the frame locked in place, I moved the upper right corner in until the ridge between the fly's eye and "face" came into focus. I also turned that lower left corner on its axis, kind of spinning the frame so that the upper left corner went deeper into the scene. It's a very minor tilt / twist with my wrist that makes a huge difference in the amount of the subject that I can cover with the area of acceptable focus.

The result is an image that has a lot of depth simply because I'm not wasting any of it...
Posted by Dalantech at 11:57 PM