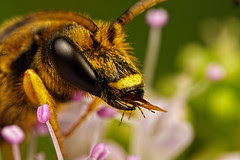 Feeding on Mint I
Originally uploaded by Dalantech.
...is making Johnny a very dull boy. Sorry for my lack of posts -way too much Real Life getting in the way lately. Being a network engineer is fun -but replacing nearly every piece of gear in two nets that haven't been upgraded in over six years isn't ;)

After a brutal two months at the day job I took a long weekend and stayed out at my mother in law's farm. Early one morning I was out looking at the flowers I'd planted when I spotted a very lethargic solitary bee on some mint (odd for this time of year). So still in my pajamas I ran back to the house and broke out my camera. Fortunately the muscle memory that I've built up from shooting macro hand held seems to be permanent and placing the area of acceptable focus where I want it is still easy and automatic. So if you're still struggling with nailing the focus don't worry about it -you'll get the technique down soon enough. Just keep practicing!

One of the things that I do, especially for shots like the one I've included with this post, is tilt one corner of the frame a littler further in while locking one corner in place. By locking the lower left corner, and tilting the upper left into the scene a little, I can get one of those "magic angles" that makes the most of what little depth I have. Although it looks like I've got a lot of depth, or I focus stacked, because that stamen and the bee are both in focus it's just an illusion -the image is a single frame shot at 4x and F10.

The last trick was placing a sunflower leaf behind the bee so that the flash would have something to reflect off of and I could keep the background from being black. Not that I have anything against black backgrounds in macro photos -sometimes it's best to let the background go dark. But for this shot the contrast between the subject and green works, and that's the real reason why I took the time to position the critter in front of a leaf.

Until next time take care :)

just want to say i really enjoy your blog. i've read a incredible amount of useful information that i put into practice when i'm out with my macro rig. of course, i emphasize the word practice...

Hi John. I would like to thank you for your blog and all the precious information it contains. I presently use a Canon 500D, the 60 mm macro with Kenko tubes and a MR-14EX macro flash. 2 days ago I finally shot a Dragon fly at a 3X magnification. And I plan to acquire a MPE-65. Your help is really useful, thanks again.
Ray.