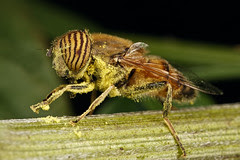 Cleaning Up I
Originally uploaded by Dalantech.
It feels like spring here in southern Italy so I decided to get out and test a new diffuser that I've been working on (more on the diffuser in a future post). It was warm with plenty of sun so the critters where hyper active, and yet I managed a few shots of this Banded Eye Drone not because I'm special, or have some unique power over wild creatures.

I got close cause the Drone was busy.

Insects just don't seem to have a whole lot of "processing power" -if they are engaged in just about any activity then they aren't expending too many brain cells on predator, or photographer, avoidance. So the key to getting close to them is learning their habits and quirks.

Here's the exact same insect a few minutes later. It had taken off so I set my lens to 2x and the camera to ISO 400 (to get some detail in the background) and waited. Less than a minute later the Drone landed in the exact some spot it had been before and started cleaning itself again. Most insects move in predictable patterns that you can take advantage of... 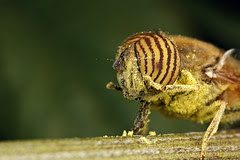 The more you learn about the critters that you want to photograph the easier it is to get the images you want. Happy shooting folks :)
Posted by Dalantech at 3:14 AM