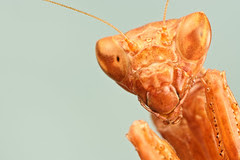 M is for Mantis
Originally uploaded by Dalantech.
Still experimenting with different materials and techniques. First up is a mantis that I shot in front of a piece of light blue construction paper. II though that since the paper had a matte finish it would make a good background, but oddly enough it looked kind of grey in some of the images that I took. Also notice that the pseudo pupil is almost missing in the critter's left eye -that effect is caused by the way the flash reflects off of the compound eyes (a mantis doesn't really have a pupil). The second flash that I was using to illuminate the background all but washed it out, and what's left is in the wrong position. In the future if I use a second flash when shooting a mantis I'll place it directly behind it. 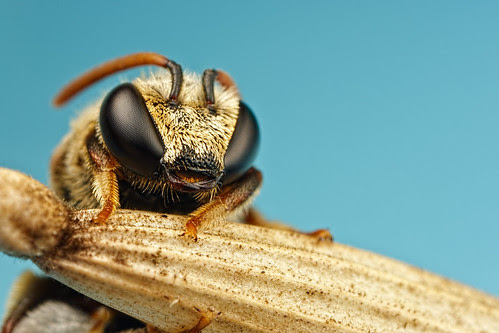 There's no natural light in those first two shots, but this next one is a mix of natural light and flash. I set the shutter to 1/20 of a second to expose the reeds in the background, and then let E-TTL metering expose the subject with the flash. This is my preferred method for keeping the background from being black, especially when I can get a good mix of natural light and flash. Even though the sunlight was pretty harsh (taken at about 3PM on a cloudless day) the color and saturation in the background look good because it's out of focus and a little under exposed. A digital sensor reacts to under exposure in the same way as color positive slide film -colors saturate. The downside to this method is that there can be enough natural light to partially expose the subject which makes freezing motion difficult. 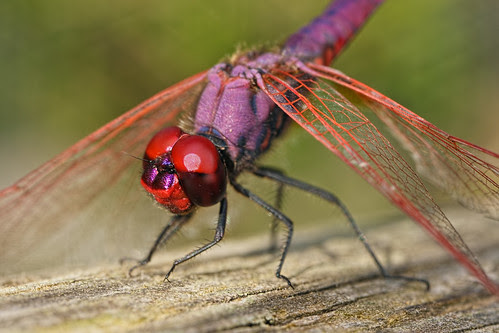 I've also noticed that when creating artificial backgrounds that smooth backgrounds do not look as good as ones that have some color or texture variation (especially if the background is not blue). The brain sort of expects vegetation to keep the background from looking smooth. Compare the dragonfly in the previous image with the bee in the next shot -this one is all flash: 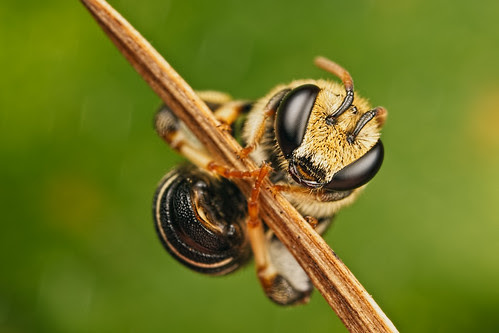 Posted by Dalantech at 1:10 AM