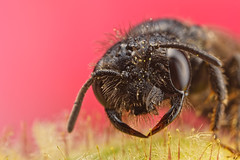 I woke up early, not long after the sun had come up, hoping to find something to photograph. The nighttime temperatures were still pretty low, something that both works for and against me: If I could find a bee then it would probably be pretty lethargic and I could get close. But since the weather was still cool most of the bees are still sleeping underground, and the species that do not sleep in tunnels aren’t out yet.

The bee included with this post is a very small species, not more than a few millimeters long. This one had either gone to sleep on a flower (males will sleep in the areas that they are patrolling for mates), or its metabolism had dropped for some reason and it couldn’t find shelter underground. At night the flower closed, trapping the bee inside. When I first spotted it there was just a little head sticking out of the top of that flower and I was hoping to get a much different composition than the one pictured. But when I grabbed the flower’s stem to steady it the bee crawled the rest of the way out. Not to be deterred I spotted a rose nearby that I could use for the background and a few other compositions started popping into my head. I never use a tripod or focusing rail, preferring to shoot hand held because it’s a lot faster than messing with the dials on a focusing rail (once I built up the muscle memory for it). While holding onto the stem of the flower with my left hand I rest the lens on that same hand so that both subject and camera are on the same “platform”. I set the focus my sliding the lens on my hand, and I can make adjustments to the angle of the subject just by rotating the stem between my thumb and index finger. Sounds tricky and it is, but once you get used to it it’s actually an easy way to shoot macro at high magnification.

I chose a low angle because I like shooting insects in much the same way that a portrait photographer photographs a model. You wouldn’t take a shot of the top of someone’s head, and taking a shot with an “I’m about to step on it” perspective is really boring. I focused on the bee’s mandible, and then “rolled” the camera slightly toward the top right corner of the frame so that the area of acceptable focus would cover as much of the bee’s face as possible. I’m not a detail junky, so taking a single frame at five times life size and F11 gives me a good balance between depth of field and detail.

Backgrounds are important in any image, and when dealing with flash falloff it’s really important to have something close behind the subject to reflect light back into the camera. Fortunately the flower the bee was on was close to a dark pink rose and I was able to use it to keep the background from being black. Also notice that the background color isn’t even. Here again I’m borrowing a compositional concept from another photographic discipline, but this time it’s landscape photography. When shooting a landscape you really want partly cloudy skies. A clear sky will make the scene look flat because the background color will be even, and clouds add a lot of depth because they break up that background. Likewise here since I’ve positioned the bee in front of an area where the color isn’t even the image has a lot more depth –it looks more three dimensional. Of course the way that I’m positioning the flash heads, one used as a key and the other as a fill, also helps because the light on the subject isn’t dead even.

Footnote: Why did I go into such detail on this particular deconstruction? Because I’m getting too many emails and private messages from people who have seen my work, went out and bought the same gear, and they are getting frustrated because they can’t get the same results. Having enough disposable income for a high end DSLR, macro lens, and dedicated macro flash is not an “I win button”. There’s so much more to a good photo than just the equipment that was used to take it it’s not even remotely funny. Macro is probably one of the most demanding photographic disciplines and if you don’t have a lot of patience or you’re not willing to take the time to learn how to photograph the small world then you need to consider doing something else. Walking on a tight rope looks easy until you’re the one putting your feet on the rope…
Posted by Dalantech at 4:16 AM