I want to give you a full breakdown of how I'm shooting active Sweat Bees, and most of what I'm going to cover will apply to just about any active subject. The image to the right was what I was trying to capture, although it's not the frame that's still stuck in my head. I can't control where the critter is going to be, or where the antennas are pointing, so I just have to work with what she gives me. But it's close and I'm happy with it, and here's how I took it.

Sourgrass starts growing in my yard in the fall and by early May it's already dormant and waiting for cooler temps and less sunlight. It typically blooms in the early spring, so the peak time for the flowers to be in full bloom is from about mid February to mid April. Most of the ground dwelling bees don't get active until late March. So there is a roughly four week window to photograph female Sweat Bees foraging in Sourgrass flowers for pollen. After the Sourgrass is gone they move on to other pollen sources (like Dandelions). The flowers completely close in the afternoon and don't open until the sun has been up for a few hours and it's already warm. So there's no chance to catch a sleeping bee in one of them unless it rains after the bees get active and there is a temperature drop. So shooting the critters when they are hyperactive and foraging for pollen is the only choice, and it's what I'm looking to capture with the camera anyway.

A lot of people will tell you that you cannot shoot macro on windy days, but it's actually not true. Most insects are very sensitive to vibration, and it's easier to photograph them in flowers when I can grab onto the flower's stem with my left hand and then rest the lens on that same hand to keep the scene steady. But when it not windy it's easy for the critter to tell when I've grabbed on, and when they do they'll stop foraging and come to the top of the flower to investigate. More often that not they will be facing away from the camera, but it's not a total loss since I'm holding onto the stem and can gently rotate the flower so that the bee is facing the camera. This is the type of shot that I can get when she figures out that I'm close. 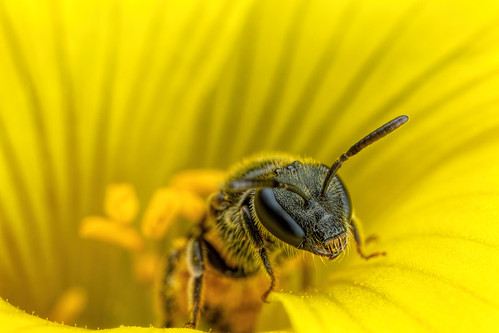 Not a bad shot, just not what I'm looking for. To get the depth that you see in that image I'm focusing on the leading edge of bee's mandibles, using my peripheral vision to frame and compose the scene (so I don't have to look away from the focus point), and twisting my wrist (sometimes both of them) to lay the area of acceptable focus over the curve of the critter's head. In that scene I'm tilting the frame toward the top and right without moving the focus that I have on the bee's mandibles, and it's something that I don't have to think about after 14 years of shooting macro (13 of that with just the MP-E 65mm macro lens). I then refocus, reframe, and take another shot if the subject doesn't take off and I can take each shot with less than a second between them because all I have to think about and concentrate on is where I'm placing the initial focus. I'm not shotgunning the shutter release and hoping that I get something to post, and since the bees are in motion if a "spray and pray" technique gave me a usable image it would just be pure luck and that's not how I want to shoot anything. Being able to rapidly reframe, refocus, and take a shot is important because they are in motion and I want to catch them stripping pollen out of Sourgrass anthers with their mandibles like this: 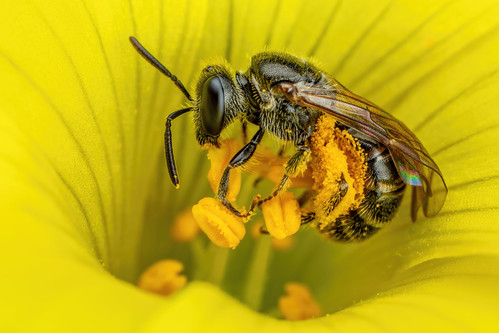 Still not the frame that's stuck in my head, but I'll get another opportunity to photograph them again but it won't be until next year.

Note: There are still a lot of you out there who think that all you need is the equipment that I have and images are just gonna magically jump into the camera. Someone recently replied to one of my posts on Reddit indicating that he wished he had my gear, to which I replied that what he really wanted was my 14 years of experience shooting macro. This is what he said:

"You don't know me or my want to..... so you may be right but.... I could give you a run for your money with an 8th of the experience!! just give me a camera equally powerful promise il deliver lol"

I asked for a link to his gallery and didn't get it, and rightfully so. If he could give me a run for my money with my gear and 1/8 of my experience then he should be shooting at my level already because the equipment I use just makes my style of shooting convenient for me (might not work for you). Notice that in the deconstruction above not once did I mention the hardware I used, and I didn't mention it cause it wasn't relevant to getting the photos. Everything depended on my knowledge of the subject, my ability to get close to an active wild animal, and how to make the most out of the limited depth of field.

That next lens, next camera body, next whatever isn't going to make you a better photographer. Learn to use what you have now...
Posted by Dalantech at 3:40 AM