I've probably spent the better part of a decade trying to wrap my head around flash photography and how to diffuse a harsh point source like a twin flash in as short of a space as possible. For field macro you just don't have a lot of room to work, so any diffusion scheme has to be compact. I also like to use a twin flash as two separate light sources, in a key (one head at the top of the lens) and fill (one head off to the side) configuration because it gives me a lot of control over the highlights and shadows. It also allow me to partially wrap light around the subject so that it doesn't look flat. If you place the flash heads on opposite sides of the subject, or fire them through a single diffuser that's connected to the end of the lens, the light will be too even across the subject and will potentially make the subject look flat. I don't focus stack, but for those of you who do flat light is a composition buzz kill. Get everything in focus and evenly lit and your images will look 2D. So here's what I've learned while loosing my mind trying to diffuse a twin flash: Here's where things get "tricky": There's a difference between soft light and diffused light, and they are not the same. Using a diffuser that is large relative to the subject will give you soft light, and you can see it in the quality of the shadows. But diffusing the light means forcing the light to spread out, and a large diffusion surface relative to the subject won't necessarily do that. Diffused light means forcing the light to spread out so that the intensity of the light across the diffusion surface is the same. You can have soft light (soft shadows) and a hard well defined specular area.

Understanding the difference between soft and diffused light was a eureka moment for me, because I initially thought that I had hit a hard limit in my diffusion because using a larger diffuser wasn't practical. But my light was soft enough with my current diffusers, or another way of saying it is that my diffusers were large enough relative to the subject, because I was getting soft shadows. Take a look at the shadow under the Sourgrass petal just below the Sweat Bee's antenna: 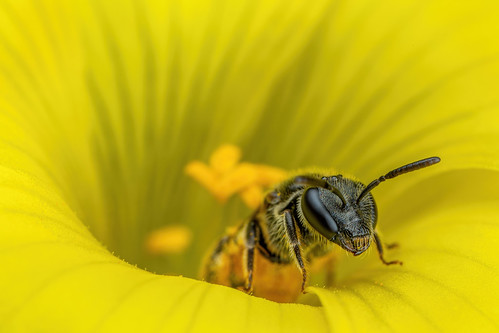 The shadow is soft, so my diffusers are large enough. But the light that they were creating could best be described as "soft specular" and not "soft diffused" because the specular area is still well defined and almost harsh. My light wasn't really diffused. But after modifying the internal structure of my original diffuser (the details of which I'm not going into) I'm now getting soft diffused light with almost no hot specular highlights (the intensity of the light across my diffusers is almost the same) while only losing about 1 and 1/4 stops when compared to the bare flash heads. Light that's so well diffused I'm having a tough time determining if I've nailed critical focus on some subjects, when viewing images on my camera's LCD screen, because there is no noticeable specular reflection in their eyes.

The Death of the Kaiser

After some experimenting with a cooperative, and very metallic, Chafer Beetle I've determined that using a Kaiser Adjustable Flash Shoe to elevate the key is working against me in some situations. Depending on the angle that I'm shooting from it can cause the fill light to be too harsh and/or pump a lot of light into the flower that a critter is perched on creating a third specular highlight. So I'm going to be experimenting with the angle of the flash heads more.

The quality of your light and the angle between the light, subject, and sensor will determine how much detail you can capture. You can easily lose more detail to poor light quality than to diffraction, and if you focus stack you really should be putting some serious effort into your light. Doesn't make sense to spend all that time to create a stack only to erase detail with poor specular highlights.

Note: All of my diffuser design has been geared toward creating a relatively small, compact, diffuser that would give me the light quality that I wanted but still be practical for field macro. However light is light, and I'm sure that the information I've provided in this post can be applied to any diffusion setup that you might build for yourself.
Posted by Dalantech at 3:00 AM

Thank you for a great piece of information! I've never heard that soft and diffused light were not the same thing.

Same here Roman, and learning the difference helped me to take my diffuser design in the right direction.