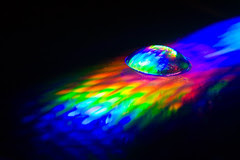 LED Abstract series 1-1
Originally uploaded by Dalantech.
The bugs are almost gone, except for the jumping spider that has greeted me for the last few mornings on my living room floor, so I’m back to shooting abstract macro. There are two aspects that make shooting abstracts difficult for me. The first is all of the images that I’ve seen from other photographers -I can’t use them. I just don’t want to do what’s already been done because if I’m walking in someone else’s shadow my work isn’t going to stand out. So I have to put all of the images that I’ve seen out of my head and try to come up with a new idea that isn’t influenced by anyone else.

Then there is that little problem of taking that idea, once I have it, out of my head and into the camera ;)

A few weeks ago I was experimenting with a 3 watt LED and a DVD and I liked the results. So I decided to try shooting a small water drop while pumping the light form the LED into the DVD. The setup is pretty simple: I placed the camera on a Joby Gorillapod SLR-Zoom (highly recommended!) that I set on my living room table and then I stacked some books up so I could have a working surface even with the camera. Then I took a DVD and coated part of it with canola oil. Any light oil will work, but I used canola since it is almost completely clear. The oil serves two purposes; it keeps the surface of the DVD from looking completely smooth (so the final image has some “defects” in it and won’t look like it was computer generated) and it makes the surface tension between the DVD and the water drop higher so the drop doesn’t flatten out. Then I just placed a drop of water on the DVD and focused the lens by moving the books and adjusting the magnification of my MPE-65 to shift the point of sharp focus –kinda like a poor mans focusing rail.

The tricky part is getting the light and the color that I want. Moving the LED closer to the DVD effects how sharp and defined the light will look after it bounces off of the DVD and splits into the different colors. So I have to “focus” the light by changing the distance from the LED to the DVD. But the angle of the light also effects how the colors will split, so it can take a while to get the right combination of distance and angle –minor changes in either one can have a big impact on how the final image looks. Also what I see in the view finder isn’t always what the sensor captures. Fast shutter speeds seem to give me better results than slower ones, even though the image might look better in the view finder when the light levels are low.

A little imagination, and some trial and error, led to the image included with this post :)
Posted by Dalantech at 1:55 AM

Extremely cool tutorial! Just this week I played around with and old computer hard drive and some baby powered lit with an LED head lamp (I photograph Adventure races out in the woods most races are longer then 24 hours so the head lamp has become a essential part of my kit) . It was fun but my shots didn’t turn out any thing like yours. On Dgrinn forum you wrote about being able to sell these. I feel the same way (I think) as you, every time I have transformed something I love to do into work it becomes WORK. I have sold some of my Adventure racing photos mainly to the racers but a few to magazines and news papers. I don’t know if it’s impolite to ask but how/who purchases your abstracts. I don’t think that my photography is any where near yours or many others level but I do hope with time behind the glass I will get there. It would be nice if I had the means to self support this addition. Thank you for your time. Mark S. Miller www.teamracephotos.com

So far it doesn't feel like work yet -although I think I'm still at that stage where I'm making minimum wage selling photos. It's fun to meet new people and discuss the images and to help them with their photography -and I end up learning new things myself! :)

Most of the people who have purchased my images have been young early 20 somethings, and it's usually in person. Recently I sold images at an international bazaar here in Naples and I'm working with a local art shop here in town.

Practice and more practice Mark -I spend a lot of time with the camera in my hand and I delete more photos than I keep...

Thank you for taking the time to create this informative blog. I have lived in Florida all my life. So SCUBA diving was something I had the opportunity to do at a very young age. Later in life I became a SCUBA instructor (I thought this would be great, I love diving so know I could do it all the time)… I worked as an instructor for three years and it ruined diving for me. The same thing happened with computers (I went to school for my CCNA and have work as a security analyst for 6 years) I used to love sitting in front of my terminal. After getting my first DSLR I have again found a passion for something. I have been laid up for the last 6 weeks (this is why I have been posting more on the Dgrinn) do to a broken leg. But prior to the leg thing I was out with my camera everyday for at least 3 hours a day. Seeing things through a Macro lens is something I think everyone serious about photography should spend some time doing. It really shows you what light, aperture and shutter can do. At least for me it has opened my eyes.

Thanks for you response, I thought people where buying through you SmugMug site and was curious as to how you where getting them there. Naples is that where they are building a new NATO complex? My brother in laws firm is one of the structural engineers on that job. MM

Teaching is something that I enjoy doing, so it hasn't ruined photography for me. I'm a civilian network engineer (working at Capodicino) and I teach computers and networks as part of my day job.

About the only people making money from SmugMug are event photographers; shoot a wedding, put up a private gallery of the images, and then let the happy couple order prints. In time I think I will get some sales through SmugMug, but it will be from people who have met me in person (or maybe people who read this blog).

Sorry to hear about your leg and I hope you get to feeling better!

I was shooting dragonflies at the lake and had stopped to show some curious onlookers the images on the camera's LCD. One woman told me that I was lucky because I get to see the world in a completely different way and I had to agree with her :)

There is a new base going up in Lago Patria but it's not complete yet.

WONDERFUL tutorial; infinitely better results than a similar photoshoot i tried a few weeks back... will retry with a few of your ideas... Thanks so much for posting them!