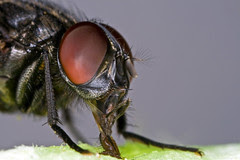 November Fly series 1-2
Originally uploaded by Dalantech.
I’ve seen a lot of incredible photos taken with the MPE-65mm macro lens at apertures that should have made the image soft due to diffraction, and yet there is a lot of detail in them anyway. After looking at my own work and a lot of trial and error I’m beginning to think that a lot of what people call diffraction is simply motion blur.

Don’t get me wrong; diffraction is a problem and it does exist. The laws of physics can’t be changed –if you send light through a small opening it will have e tendency to bend. Wikipedia has an excellent article on diffraction if you want to dig deeper into the effect.

Unfortunately I think that a lot of photographers are too quick to blame diffraction for soft images, so they open up the aperture on their lens, get a sharper image, and then think that they’ve defeated diffraction by using a smaller Fstop. But by dropping down to a smaller Fstop (moving to a larger aperture) the exposure is also changing, so that the flash has to turn on for a shorter amount of time. Maybe the problem isn’t diffraction; maybe the real issue is motion blur due to a flash duration that’s just too long…

Take a close look at the image that I’ve included with this post. I shot it at F14 and 4x with an MPE-65mm macro lens and an MR-14EX set to a 2:1 ratio (too keep the light from looking flat) and with the flash assembly turned 45 degrees off axis. That shot, even though it’s at F14, has a lot of detail and all I had to do was brace the camera so that there was no movement.

Flash macro really is nothing more than a form of stop motion photography, and keeping the flash duration to a minimum can really make a difference in the quality of your images. To learn more about high speed photography and how flashes work see the HiViz web site.
Posted by Dalantech at 4:13 AM

Regarding your line "...so that the flash has to turn on for a shorter amount of time. Maybe the problem isn’t diffraction; maybe the real issue is motion blur due to a flash duration that’s just too long…"

Flash duration doesn't come into play at the shutter speeds you are using, flash intensity does. When you open your aperture by a stop, the intensity of the flash halves (to achieve the same exposure). The duration of most flashes is in the order of 1/1000 - 1/8000+ depending on the power level (full manual is about 1/1000; for every stop you open your lens, this halves the duration when using auto flash programs. Manual flash is down to the 'tog)

Hey Oliver,
Check out the HiVis web site that I linked to at the bottom of the post. According to them, and they are the authority in stop motion photography, the intensity of your flash does not change from one exposure level to the next -the only thing that does change is the duration of the flash burst. Their stop motion photography, and my own experiences shooting macro, verify the fact that the duration of the flash does change and the intensity does not.

If you want to really learn about how a flash works then you owe it to yourself to read the HiVis web site. My flash photography improved by leaps and bounds after I studied the material that they provide.

Hi Jim, thanks for the HiVis link :). My setup is D80 - manual exposure, SB800 - manual - all this while. According to the HiVis site, i should be using TTL mode for my flash? However, i always get vastly different result whenever i use TTL mode, even for the same scene/angle/magnification level. What did i do wrong?
Thanks.
kurt

TTL exposure for the flash should work just fine -it always has for me. The only time I use full manual is when I'm shooting water drops and I'm trying to catch the splash -but you could use TTL in those situations as well. How do you have your flash mounted, and how is it diffused?

Oops! I meant John :). My speedlight is on hotshoe most of the times. Once in a while, I handhold it and use either CLS or radio trigger to fire it off camera. As for diffusion, i use a styrofoam plate/bowl with a round hole cut out to fit snugly on the lens filter. I know I lose a lot of power that way :(

It's best to get the flash as close to the subject as possible so that the flash duration is lower -and get a better diffuser. Lumiquest Mini Soft Box or Gary Fong's LightSphere II are both excellent choices...

Thanks, John! The styrofoam works quite well, but yes, i do need to get the flash closer to the subject. I've tried handholding it (and the lens simultaneously) with my left hand and it needed only 1/8 - 1/16th power compared to the usual 1/2 to 1/4 (sometimes full power) when on hotshoe. Or maybe I'll just get R1C1 :)