I’ve been looking at High Dynamic Range (HDR) images for quite a while and I really like the effect –quite a few of my contacts on Flickr use HDR in their post processing. I’ve played with a few HDR programs but couldn’t find one that I liked until recently. Either they were too much of a pain to use, too expensive, or too time consuming for someone like me who hates to spend a lot of time in post processing. But I finally found a plug-in that works with Photoshop Elements that I like thanks to Haeretik made by DCE Tools called ReDynaMix HDR. It’s easy to use, compatible with Elements version 6, and the registered version is only $16 USD (you can try it before you buy it). Before I get into the nuts and bolts about how I’ve been using it I want to give you a disclaimer…

It’s very easy to go overboard with HDR processing and end up with a shot that looks like it was computer generated instead of taken with a camera. Some of the best HDR images that I’ve seen don’t look like HDR images.

Now for the nuts and bolts. Here is an image that I processed without using ReDynaMix HDR:

Not bad, but it just doesn’t “pop”. If I had any real skill at post processing it would probably be a lot better, but I’m a network engineer and after a long day at work the last thing I want to do is spend hours in post. Another issue with this shot is all that yellow -the petals act like a colored reflector and change the quality of the light that I'm getting with the flash. The only way to avoid it is to stop shooting bees, and that's not gonna happen ;)

For the HDR version I opened the image in Elements 6 and in the RAW editor I made no changes since HDR processing is where I want to do the serious editing –another reason why it’s best to get it right with the shutter release. In the main editor I ran NoiseWare to pull out sensor noise since sending a “clean” image to ReDynaMix will reduce the amount of “surface smoothing” that I have to do (more on that later).

Now open the ReDynaMix plug-in. You’ll see a lot of options and an image that, chances are, looks “over processed”. There are two things that I do at this point to bring the shot to a level that I want. The first is to reduce the Dynamic Light Strength –by default it’s going to be set to 0.6 and, IMHO, it’s too high. Drop it down slowly and notice how the preview changes (you’ll have to release the slider to see the preview update). For this example I set it to .25 but the level that you use will depend on the image and the effect that you are looking for.

The next thing that I do is adjust the Surface Smoothness. The HDR process adds a lot of noise to an image (that’s why I ran NoiseWare before ReDynaMix) and Surface Smoothing is a way to clean up the grain –but be careful here. You don’t want to go overboard with the setting since you could end up over sharpening the image so the higher you set it the less you’ll want to sharpen your photo later. I never use anything more than the Auto Sharpen option in Elements so over sharpening isn’t a problem. Those of you who use Unsharp Mask may want to experiment with a balance between Surface Smoothing and USM. Also allowing for some “grain” can be a good thing depending on how you want the final image to look.

There are a lot of other options in ReDynaMix, and I encourage you to experiment with them. But for my images Dynamic Light Strength and Surface Smoothing have the most effect. Once I changed those two settings (and reduced the Color Saturation) I clicked on Process. Then I adjusted the levels (just set a black point) and used the Auto Sharpen option under the Enhance menu. Rub out dust spots with the Spot Healing Tool and save the image as a high quality JPG and here is the result: 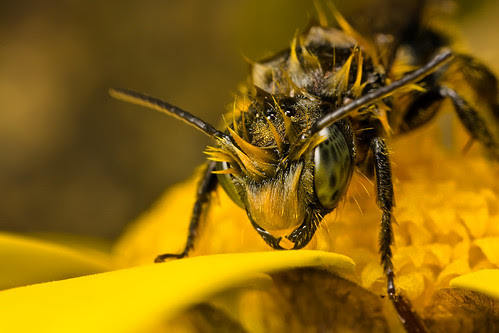 Much better color and contrast and as an added bonus the time I spent in post processing was still less than two minutes :)

Footnote: The last image in this post was chosen as the Juza Nature Photo of the Week -thanks Juza!
Posted by Dalantech at 4:05 AM

Thanks for the info on DynaMix HDR Jason :)