This post is just an example of using the Sunny 16 Rule for Macro. I was shooting this bee while the sun was behind some moderate cloud cover. The temperature was in the low teens Celsius (that’s low 50s Fahrenheit for those of you who are metrically impaired ;) and the bee’s metabolism dropped since it didn’t have the sun to help keep it warm. Shooting at ISO 200 gave me this exposure: 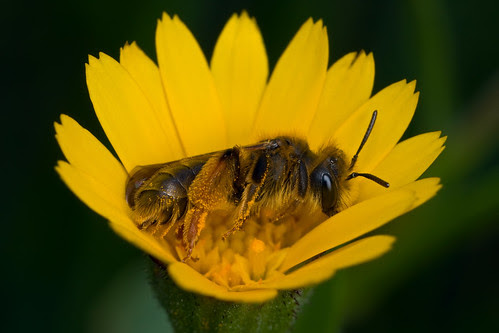 Notice that there is some green in the background, but not much. It’s pretty much a flash only shot –not enough natural light to help expose anything in the scene. But then the sun came out, and I knew that I could change to ISO 400 and get the natural light to expose the background for me and that’s what I did for this next shot: 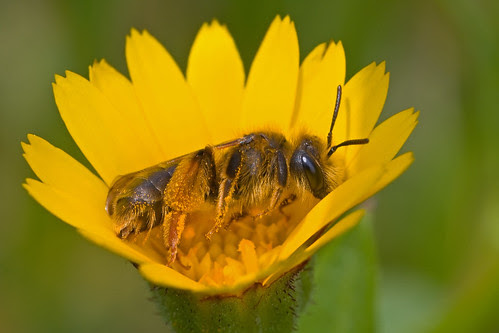 Identical scenes with the same camera settings for aperture (F11) and shutter (1/250) but with a higher ISO and more natural light in the second image –the background is completely illuminated by the sun and not the flash. I could have changed the Fstop to 8 and left the ISO at 200, but I didn’t want to give up any depth of field.

Very easy to do and the final image doesn’t look like a flash shot because the background is exposed…
Posted by Dalantech at 4:57 AM

Great examples of the sunny rule. Thanks for sharing - Amaviael

Do you think 400 is about as high as the ISO can take for quality shots?

Fantastic! Love your site, it's helped me out so much with my macro photography. Thank you!