Studio Photography in the Field 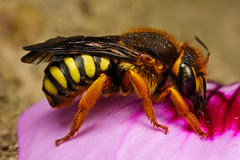 The Studio
Originally uploaded by Dalantech.
Given the choice I'd much rather shoot active subjects because the resulting images, if I can get them, tell a story. But some critters are just too skittish to photograph when they're active, like this solitary bee (looks like a hornet but it's not). I have some ethical issues with refrigerating or freezing subjects (unless you're taking a large number of frames for a focus stack chilling a subject is lame ) so the only choice left is to shoot early in the morning on the way to work before the critters have a chance to wake up. Fortunately I found this bee snoozing and took advantage of it for a few shots.

The setup is simple: I took a flower petal and placed it on the top of a stone wall close to where I found the bee. I then got the critter to climb onto my finger and I placed it on the flower petal. Most solitary bees are not aggressive, and due to its size I'm pretty sure that this one is male and has no stinger anyway. Of course I moved slowly and I tried to be as non threatening as I could. Once I had the bee in place all I had to do was put my left hand under the lens and then rest that hand against the wall to brace the camera. Studio conditions at the edge of a parking lot. Here's one of the portraits that I took at 4x and F10: 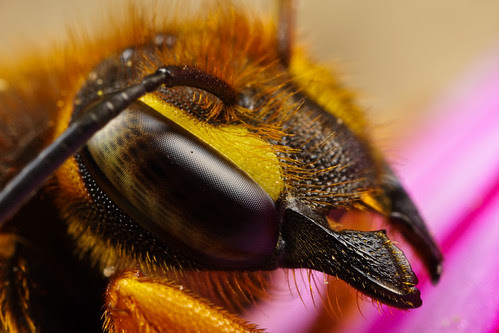 Again I really consider this type of shooting to be some of the easiest that I do because I've got full control of the scene and plenty of time to nail the composition and focus. Weather permitting I'll be back to shooting bees actively feeding in clover between 1x and 2x soon -just don't ask me about the "keeper rate"... ;)
Posted by Dalantech at 12:03 AM