What Macro Lens Should You Buy? 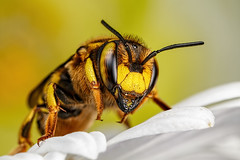 Want to get into macro and you're not sure what lens to buy? Don't waste your time posting a question to any online forum. You'll just get a lot of biased information from people who are just repeating misinformation that they've read online, or who think that everyone on the planet should shoot macro the way that they do (and some of those people don't even shoot macro). To add insult to injury gear questions are almost impossible to answer because your style of photography is going to dictate the equipment that you use. Don't have a style yet? So how can anyone give you any rational advice?...

There are some hard limitations when shooting macro photography though -and by macro I mean from 1x to 10x magnification (10x and higher is considered micro photography). Shooting closeups below 1x is considerably easier than shooting at 1x and higher mag simply because there is more surface area to reflect light back into the lens. So when shooting macro the light source that you want to use is going to have a big impact on your lens choices and how you set up your camera. The first option is to use natural light and you need to shoot in the golden hour, that hour right after sunrise or right before sunset, or when there are some thin high altitude clouds acting as a diffuser for the big yellow ball. Shooting in the middle of the day when the light is harsh is going to give you scenes that have too much contrast as well as specular highlights that are going to look ugly. The only negative to shooting when the light is good is that there won't be enough of it to give you shutter speeds fast enough to freeze motion. You'll be reduced to shooting lethargic subjects, and odds are your camera will be attached to a focusing rail and a tripod. Nothing wrong with doing any of that, but your choices of subjects will be limited. It's easy for me to spot natural light macro shooters -I just count the number of dew covered insects in their gallery. I should also mention that if you're going to use natural light as the primary light source for the subject then you're better off using a long focal length lens -the longer the better. The extra working distance will come in handy since you don't want to be so close to the subject that you're casting a shadow over it.

The second option is to use a flash as the primary light source for the subject, and this is where things can kinda get counter intuitive. The funny thing about a flash is that the light it produces will look more diffused, and will give you softer specular highlights, the closer you get it to the subject due to the Apparent Light Size Principle (that article is required reading). So it doesn't make any sense to buy a long focal length macro lens only to put the flash on a bracket way out past the end of the lens. You're actually better off with a short focal length lens in the 60mm range.

Another advantage to using a flash is that if it doesn't fire then odds are the subject is going to be completely black. Why is that good? It means that the short duration pulse of light that the flash is producing is actually acting as your "shutter", and it will allow you to freeze a lot of motion and still get sharp images. Using a flash allowed me to follow an active Mantis and shoot it with the camera in my hand while it was cleaning itself and still get a sharp photo. 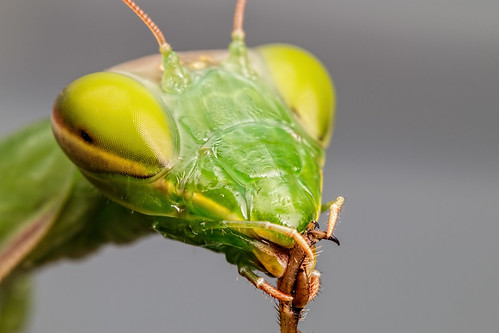 I took that shot with a Canon EF-S 60mm macro lens with 37mm of extension tubes from about three inches away (2x, since the lens loses a lot of focal length at it's minimum focusing distance). An image like that one isn't possible using natural light because that scene is just too small, only 11.1 mm long by 7.4 mm high. Just not enough natural light being reflected off of such a small area to give me a shutter speed fast enough to freeze motion even if I had maxed out the ISO and opened the lens up to F2.8 -and if I did that and managed to get a decent shutter speed the resulting photo would look like garbage. Instead I set the camera to F11, ISO 200, and 1/125 of a second to expose for the natural light in the background and let the camera meter for and expose the subject with the flash. Any movement recorded by the camera in the background would have been irrelevant since it's out of focus anyway.

The light source you choose is also going to have a huge impact on your photographic style. Do you want to put your camera on a focusing rail and a tripod and then go look for subjects that will give you enough time to set all of that up (natural light)? Or do you want to keep your gear to a minimum, hold the camera in your hand, and let the subject dictate how you're going to photograph it (flash)? I really like the way that good natural light looks, but sadly if the natural light looks good then it is well diffused and there just isn't going to be enough of it for fast shutter speeds. That's not an opinion; physics simply says "No!" ;)
Posted by Dalantech at 3:17 AM