National Geographic posted an article concerning How to photograph wildlife ethically and I wanted to write on the subject from the perspective of a macro photographer. If I'm being completely honest, and if I didn't want to stress out any of my subjects, I probably wouldn't shoot any higher than 1/3 life size and I'd use a 300mm prime that would give me a working distance of about two meters. Sometimes I get lucky while photographing a dormant subject and it wakes up either completely acclimated to me, or I'm so large in its field of view that it really can't recognize what I am. That's pretty much what happened with the Sawfly pictured to the right. It just woke up and decided to have breakfast. But not every dormant subject that gets active finds my presence acceptable. When this European Wool Carder Bee managed to get its metabolism going it went into full "fight or flight" mode, and I barely had time to take this single frame... 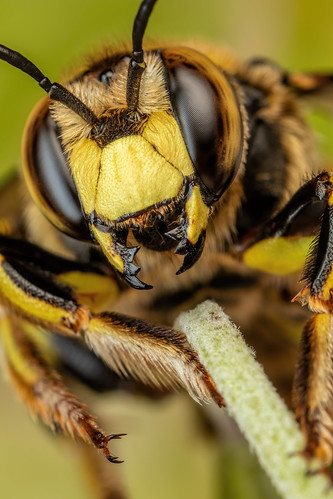 While talking to my wife about not stressing out the critters by getting too close she reminded me that gardening does the same thing...

Taking macro photos of insects that are already active, and by active I mean they are in motion all the time (lets exclude the occasional cooperative jumping spider), is pretty much impossible without a little help in the form of bait. But there's a right way and a wrong way to do it. One of the better ways to give a critter a reason to stick around is to inject a flower with either some simple white sugar syrup, or Agave Nectar. It will modify their feeding behavior, because they'll start passing over flowers that haven't been injected in favor of the ones that have. But at least the resulting image will be of a bee feeding on a flower and after a little while they'll go back to their normal foraging habits. 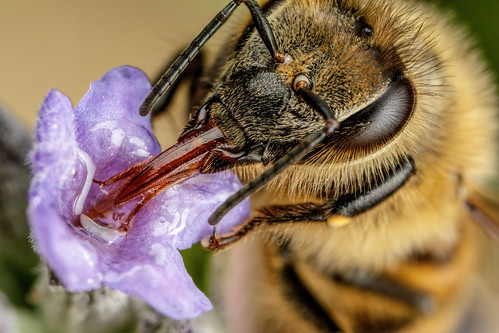 I'd avoid indiscriminate spraying of plants with sugar water though. The resulting images will be of an insect licking a leaf, which they normally don't do, and it's a big departure from their normally feeding behavior. It's also a bad idea to put out so much bait that you end up emptying out a hive or attracting a swarm. One word of caution though: Sometimes baited bees start aggressively competing with other insects for the sweet stuff, and they might not recognize you as the one that's putting it out. So if they do seem to be getting aggressive, and increasing in numbers, it's best to back off and try again some other time. Sometimes they'll realize that you're the one putting out the bait, and you can pull off shots like this one...

If you follow my photography you know I don't focus stack. Not that there's anything inherently wrong with it (almost, will cover that in a second), it's just that focus stacking comes with some of the same limitations as using a tripod and a focusing rail -you gotta find a subject willing to sit still long enough to finish all the frames for a stack. Since I prefer to shoot semi-active to hyperactive subjects that are moving, focus stacking pretty much isn't an option. But if you stack you can do it in an ethical manner. Photographers like LordV (Brian Valentine) helped to popularized focus stacking more than a decade ago and Brian, to my knowledge, has never harmed a subject for a photo. He's always left them like he found them, alive and kicking. But there's been a disturbing trend over the years to take ever increasingly sharp images of the small world's inhabitants that's led a lot of focus stackers to either refrigerate, or euthanize, their subjects. IMHO macro photographers have a responsibility to change hearts and minds concerning insects, to get people to see them as more than "just bugs" before we send them all into history by either poisoning them out of existence with chemicals or starving them to extinction by reducing their habitat. Killing a critter for a photo sends the wrong message, and people are pretty much bored with seeing razor sharp photos of dead insects. Some of you may claim that you're killing and focus stacking your subjects in order to catalog them. But the folks at the USGS Bee Inventory and Monitoring Lab are not only doing a better job of photographing dead critters than 99.9% of you, they are infinitely more qualified. Add to that the backlash I've seen on social media to dead insect photography and you're better off switching to lethargic subjects to get your focus stacking fix. Although the general perception is that the subject is dead in every focus stacked image, and it makes me feel sorry for the folks that have some genuine skill focus stacking live critters.

As always if you have comments or concerns just post them. Comments are moderated, but I post all of them unless you're selling yourself (that's the reason why moderation is enabled -sigh). Until next time happy shooting!

Footnote: I can't help but think that some of the people who focus stack are taking an ungodly number of frames just to one up each other, or for bragging rights. There has to be a point of diminishing returns, and it makes me wonder if they're into macro photography just to focus stack. Kinda boring, to be honest...
Posted by Dalantech at 2:09 AM