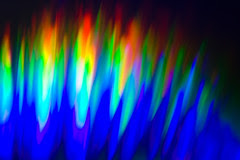 Painting with Light series 1-7
Originally uploaded by Dalantech.
It rained today and I was bored, so I broke out a 3 watt LED light that I bought just to experiment with. I wanted to see if the light would be bright enough to allow me to take abstract images without using a flash. The only thing I don’t like about doing abstracts with a flash is that I never know what I’m going to get until after I’ve taken the shot, since all of the light is coming from the flash itself. With the LED light I was hoping that I’d be able to see what I’d get before pressing the shutter release, but I ran into a problem.

I’d see this really incredible pattern reflected off of the DVD that I was pumping light into, but when I looked through the camera the pattern wasn’t there. It took me a minute to realize that the effect I saw reflected off of the disk depended on my distance to it, and I could change the effect by keeping the camera still and just changing the distance between the light and the DVD. The image attached to this post, and the rest of the photos in the Painting with Light series 1-1 to 1-7 are the end result of my rainy day experimenting.
Posted by Dalantech at 9:58 AM