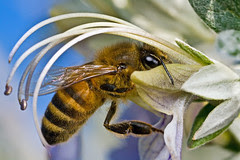 Signs of Spring series 1-2
Originally uploaded by Dalantech.
Sometimes I like a black background because it helps to isolate the subject –very handy in situations where the background might ruin the shot because there’s just too much going on. But what about those situations where you want to show the subject in its natural environment? When shooting close-ups it’s easy: Just set you camera to shutter or aperture priority and use a little flash for fill. The range of exposures will be limited by the amount of natural light and the ISO you want to use, but you’ll get even lighting throughout the frame.

But what if you don’t want to be limited by the available light? What if you’d like to shoot at life size with a small aperture to get more depth and at the same time get some ambient light into the scene? All you have to do is put your camera in manual mode and set the shutter speed and aperture for the subject. In this case I set the shutter to 1/200 (the highest sync speed for the flash) and to F11 so I could get some depth. I set the ISO to 400 so that there would be enough ambient light to illuminate the background (the flash exposes the subject and I just let the camera's E-TTL flash metering do the work). The image attached to this post is the end result of a “dual exposure” –natural light for the background and flash for the subject and it works only in manual mode. If I had the camera set to aperture or shutter priority the bee would have been properly exposed but the sky would have been blown out.

The real trick here is to brace the camera and to shoot a subject that isn’t moving too much. There is some ambient light that’s reflecting off of the bee and getting recorded by the sensor –not much, but enough to make camera shake a potential problem. Although I didn’t use it, it’s not a bad idea to set your shutter to second curtain sync for this type of photography so that the flash is the last light source that the sensor records –it might help you freeze motion a little better if you’re having trouble getting sharp images using this technique.

Also if the ambient light is too harsh or colors don’t look saturated then lower the ISO. Likewise if the background looks too dark then increase the ISO until you get the color and light level you’re looking for. You could adjust your shutter speed as well, but it’s not a good idea because you might end up shooting too close to the ambient exposure for the subject and you might need a faster shutter speed to help freeze motion.

Too get a better understanding of how this technique works see this post at Strobist. Even though the scene is different, and he’s adjusting his shutter speed to shift the ambient exposure, the end result is the same.
Posted by Dalantech at 12:32 AM