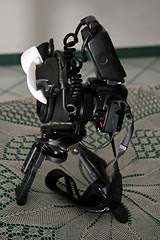 My Current Macro Rig
Originally uploaded by Dalantech.
At some point you have to stop experimenting and just get out and take photos, and after a lot of trial and error this is pretty much the rig that I’ll be using this year. I’m going to describe what’s in the photo to the right and then talk about the new diffusers.

I have the camera mounted on an Ergo Rest Multi Stand Tripod. I don’t use it if I can brace an elbow on my knee, but when I’m standing I can swing the wide two leg section out and brace it against my chest. Horizontal camera movement is pretty easy to control, but vertical movement isn’t and that’s what the Ergo Rest eliminates.

I have a remote release cord attached to the front leg of the Ergo Rest with Velcro. I use my right hand to hold the tripod and trip the shutter while adjusting the magnification with my left. I also use the tripod when shooting close-ups with a telephoto lens –very stable…

The rest is pretty standard hardware if you are a regular reader of this blog: Canon Xti (has been replaced with a 40D) with an MPE-65mm macro lens and an MT-24EX macro twin light flash. With the MPE-65 magnification starts at life size and can be increased all the way to 5x but there is no infinity focus –so this setup is strictly for macro photography.

Let’s talk about those diffusers…

Looking at the photos I took last year I noticed that the light was more diffused as I increased the magnification of the MPE-65. I’ve used all sorts of plastic hot glued directly to my MT-24EX to try to soften the harsh light it produces, but I wasn’t getting good diffusion with it until I hit about 3x.

I’m a big fan of Strobist, and no matter what photographic discipline you’re into his articles on light are priceless! His piece on Apparent Light Size got me to thinking that the diffuser I was using wasn’t large enough, since his rule of thumb for subject distance to diffuser size ratio is 2 to 1. As the magnification increase the working distance between the lens and the subject drops, so eventually I’d reach a point where I’d hit that 2 to 1 ratio with my diffuser and the light would get soft. But for a subject distance of 4 inches at life size I need a diffuser that’s at least 2” –not one that’s no bigger than the bare flash head.

After looking at Gary Fong’s Puffer Diffuser I thought I’d give it a try since it looked big enough and maybe the fact that it’s curved instead of flat would reduce reflections even further. A bit of a leap since I wasn’t sure if the diffusers would fit on the flash heads or if the flash heads would then fit on the standard Canon flash mount after I attached them. But not only are they just about a perfect fit for the MT-24EX, but I can put the flash heads on the Canon mount and they don’t touch –there’s about a centimeter and a half of clearance between the two diffusers when the flash heads are pointed all the way down. With both flash heads as close as I they can be I get about 160 degrees of light, and by turning the flash mount I can choose where the shadows will be. 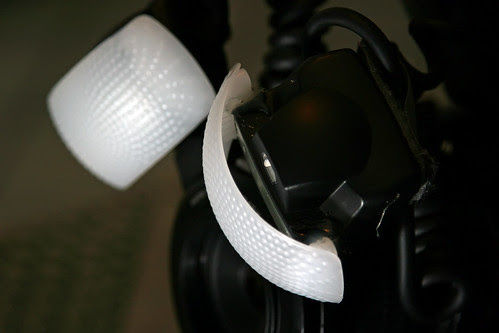 The end result of all that diffusion? The photo at the bottom of this post was taken at 2x. Notice how soft the shadows are and how “warm” the light looks… 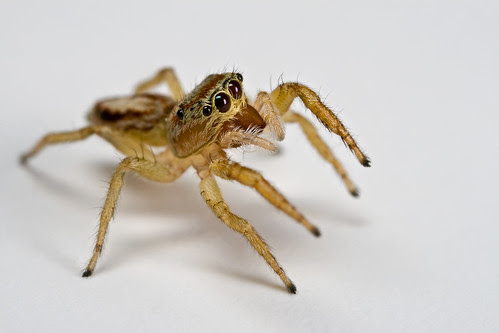 If you don't want to use hot glue on your flash heads I'm sure double sided tape or Velcro would work just about as well.
Posted by Dalantech at 10:01 AM

I said.. lol... thanks for the info about the diffusers.

Your link to G. Fong's site is dead.

The shadows look great under the jumper. Keep up the great work.

Thanks for all the info! Definitely something I would like to read more about, this is a start!

Thanks Frank and Mike! The joys of writing these posts in Word, having bits and pieces or URLS stripped out, and then Blogger tries to fill in the missing pieces and completely hoses the links. All fixed now :)

I wonder if it will fit in my nikon SB-R200 flashes. Could you please measure it?

I know that it is only $20 and I could just buy a couple, but in my case shipping cost and time will be huge.

By the way, interesting photos, I'll come back.

The result is excellent
A greeting

Without a ball head on the Ergo unit how do you manipulate your rig?

@ b.d.bop: By adjusting the legs and sliding it back and forth on the table when I'm using it for water drops or abstracts. I've never needed a macro focusing rail and I've only used a ballhead on a completely different brace.

Does this current rig replace the bazooka or do you still use the bazooka? Which setup would you recommend to someone starting to experiment with +1x macro using a Canon 100mm macro lens and extension tubes? Thanks!

Hey Tyler,
Get some practice with the 100mm + extension tubes + a teleconverter or a 500D close-up filter (the 500D will give you a little less magnification but the image quality will be better and you won't lose any light) before you get the MPE-65. The learning curve with the MPE is pretty high, and I've seen too many people jump right in the 1x and higher macro with that lens only to sell it after a few weeks of frustration.

Thanks for the quick response Dalantech and your work is truly inspiring!

I guess I was really wondering what kind of tripod/ballhead/rail/flash etc. setup you would recommend for someone in my situation. Something more similar to the Bazooka or more like the 2008 macro rig?

@ Tyler: I use an Ergo Rest support only when I'm shooting abstracts in the house (I haven't used the bazooka in a long time). All of my field work has been done hand held. The trick is to get the flash as close to the subject as possible to freeze motion. A tripod, if used properly (and most people don't) will only eliminate your motion but it won't stop the subject from moving. So it all depends on what you want to shoot -if your subjects are static then go for a tripod / ballhead / focusing rail (no help from me on which one since I don't use them) or shoot hand held. I don't use any kind of brace these days -not even the Novoflex Chest Pod seen in the Bazooka post...

Great post. Thanks a lot for all the good information. I am now going to buy the canon twin flash, and will surely complement it with the diffusers.

I've just got an mp-e and mt24ex flash. From what you've said I'm tempted by the diffusers, but a little concerned about the hot glue - but I suppose it can be removed without leaving marks?

I like the tripod you're using, but it looks to be discontinued.

Hey Daniel,
I only use that stand when I'm working in the house. The hot glue will leave marks, so you might want to use Velcro.

Great post, super informative. I just bought the Mt-24 and MP-e and was wondering about the harshness. Bought the Puffers as you suggested and am using Velcro (can't bring myself to use glue, lol). The ergo stand you have they don't make anymore and the new one is bulky and huge, have you ever had anyone suggest something different? I used my rig for the first time in the field handheld and it's a challenge!